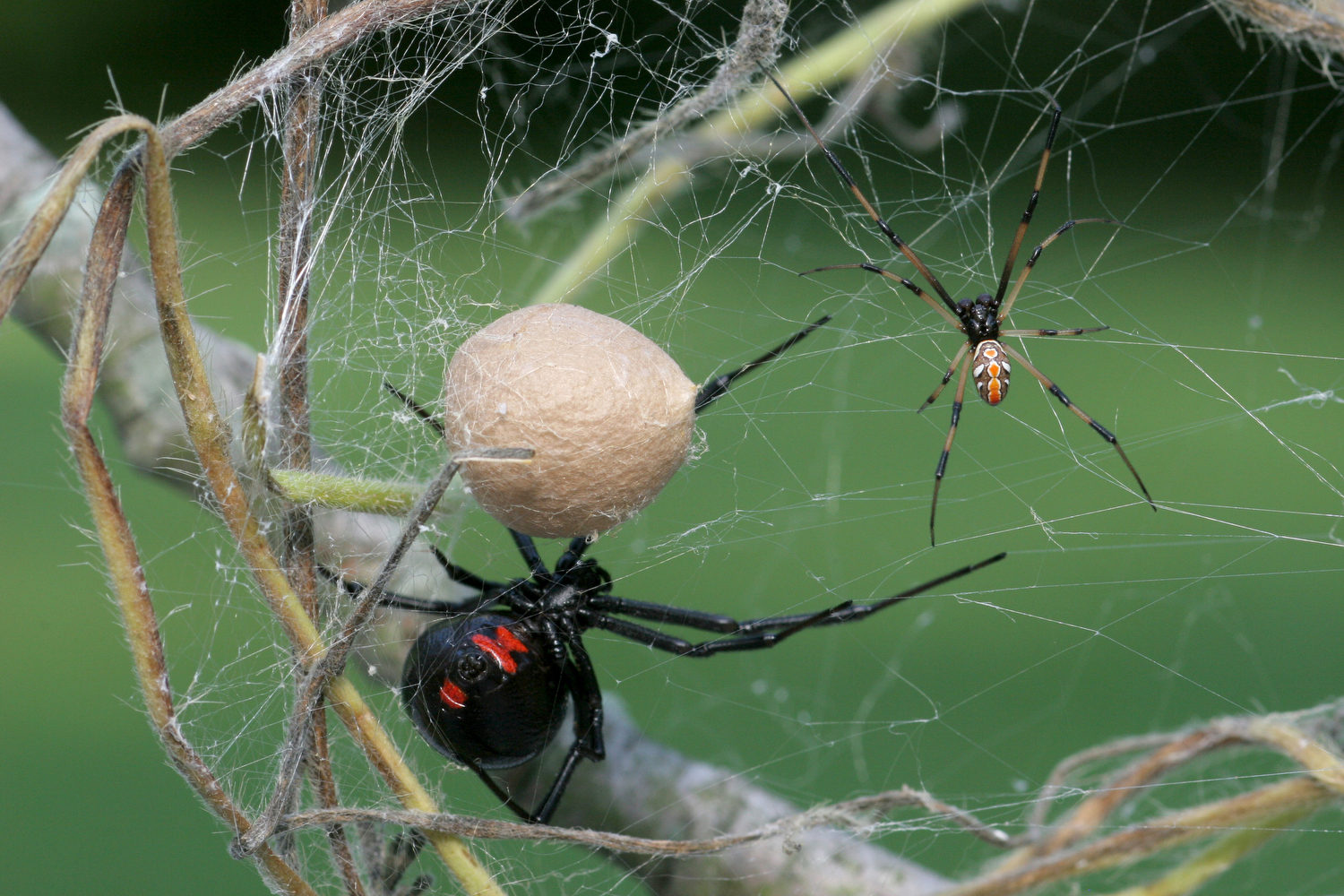 There are really only two species of dangerous Colorado spiders that can do damage to a person with a bite. And of those two species, only one that truly calls Colorado home – the Black Widow.

All 31 species of widow spiders are members of the family Theridiidae, or comb-footed spiders. They earned this name because they have a series of hairs on their hind legs that look like tiny combs.

Widow spiders prey on other insects by building sticky, irregular, cobwebs. And they use the combs on their feet to wrap their silk around their prey. They prefer to build these webs near the ground in dark, undisturbed areas.

The western widow spider – the black widow species most commonly found in Colorado – like most of the other 30 widow species of spiders, has a black coloration with a red hourglass pattern on the abdomen.

The bite of the western widow can produce muscle pain, nausea, and mild paralysis of the diaphragm, making breathing difficult. While most widow-bite victims recover without serious issues, a bite can be fatal to the elderly and to very small children.

If you are bitten by a widow spider and may be at risk of developing severe symptoms, seek treatment immediately.

You should also encourage everyone in your family to be able to identify and avoid widow spiders. There’s a fantastic article on the National Geographic Kids website with tons of facts about black widows and more black widow pictures to help you talk to your kids about these spiders and help them learn how to avoid a bad encounter with them.

That said, western widow spiders will rarely if ever, bite when not within their web. They may also be more likely to bite if the female is defending an egg sack in her web.

If found, they can most effectively be controlled by destroying and crushing the web and the spider. Alternatively, insecticides can be used to control the spiders and prevent them from entering your home.

It can also be beneficial to control other insects on your property, such as cockroaches, in order to remove a food source for the widows and prevent them from becoming abundant around your home.

The second truly dangerous spider found in Colorado is the brown recluse. They are sometimes referred to as a fiddleback spider due to a violin shaped marking on their abdomen.

Unlike the neurotoxin effects seen in widow spider bites, the venom of a brown recluse causes tissue death.

The initial bite may be felt as a small pinprick, or not noticed at all. And depending on the amount of venom introduced there may be no further impact to a victim after this bite. However, in a small percentage of cases, a few hours after the bite, a bluish patch may begin to form and develop into a blister. This may progress into an irregular lesion, an inch or two in diameter. The ulcerated area that results may take a couple of months to heal and cause permanent scaring.

Luckily, the brown recluse is extremely rare in Colorado. Most species of brown recluse spiders in the United States stick to the more southern latitudes along the border with Mexico – in Arizona, New Mexico, Texas, California, and Nevada.

However, the best known of the recluse spiders found in the U.S. – Loxosceles reclusa – occurs in many of the midwestern and south central states, and can be very common in and around homes in eastern Kansas, Missouri, Arkansas, Louisiana, Oklahoma, and parts of Texas. Worry not, however, because while occasionally it is transported out of its normal range, it rarely survives and establishes outside the area.

There are a number of species of spiders often mistaken for brown recluse in Colorado and while one or two confirmed specimens have been collected, “incidence of these spiders in Colorado is (clearly) incidental, resulting from occasional transfers coming from chronically infested areas of the country. Establishment and sustained breeding of these spiders in Colorado is much rarer, if it occurs at all” according to the Colorado State University Extension Office.

What to do if you need help with the dangerous spiders of Colorado:

Again, if you think you’ve been bitten by either of these dangerous Colorado spiders – the brown recluse or the black widow spider – and begin to develop symptoms, seek medical treatment as quickly as possible.

If you prefer to be proactive and you’re the type of person who just can’t stand the thought of any spiders at all in or around your home, give us a call at Pure Pest Co and we’ll schedule you for treatment today. We’re always ready, willing, and able to help keep your home pest free. Give us a call at 720-325-4500 or contact us through our website to schedule your service!